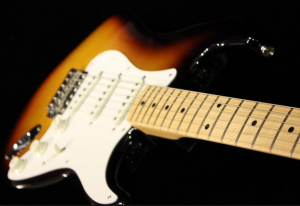 An exact replica of the ’59 model with a slimmer neck and the option of a rosewood fingerboard.

1959 was an important and highly evolutionary year for the Stratocaster because that’s when slimmer necks, rosewood fingerboards and multi-ply laminated pickguards first appeared.

The American Vintage ’59 Stratocaster presents two versions of that year’s pivotal transitional model; one from early 1959 and one from later 1959. Both have the slim-profile D-shaped maple neck of that year, with the earlier version featuring a maple fingerboard and single-ply white pickguard with eight holes; the later version featuring a dark rosewood slab fingerboard and three-ply mint green pickguard with 10 holes and vintage-style edge bevels. Both also feature a lightweight alder body, aged plastic knobs and vintage-accurate pickups, bridge saddles, tuner spacing and more.

The American Vintage Series introduces an all-new lineup of original-era model year guitars that bring Fender history and heritage to authentic and exciting new life. With key features and pivotal design elements spanning the mid-1950s to the mid-1960s, new American Vintage series instruments delve deep into Fender’s roots-expertly preserving an innovative U.S. guitar-making legacy and vividly demonstrating like never before that Fender not only knows where it’s going, but also remembers where it came from.

The American Vintage Series has long presented some of Fender’s best-selling guitars (their early-’80s introduction, in fact, was one of the first signs that Fender was “back” as the CBS era ended). Today, Fender has boldly cleared the slate to make way for a fresh American Vintage series with new features, new specs and the most meticulous level of vintage accuracy yet. Rather than just replacing the previous models with different ones, they’ve completely and comprehensively re-imagined the entire vintage-reissue concept-restoring original tooling dies, voicing new pickups, reformulating vintage colors and more-based on actual vintage guitars they tracked down to make sure they had it right. Fender did the work, and it shows, because there’s pure tonal magic in each new American Vintage instrument.

Own a piece of history. Order today.