Posted by plectrumnyc on Nov 5, 2015 in plectrum|nyc events | No Comments 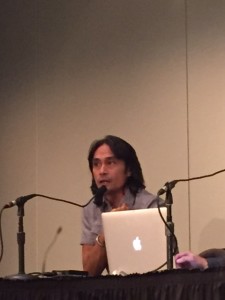 I felt right at home walking into the Analog World of “Shaman” Russ Elevado, who worked with the likes of D’Angelo, The Roots, Ledisi, Erykah Badu, Alicia Keys and not to forget an artist named Prince!

There were clearly good vibrations emanating from Russ, who appeared gentle, soft spoken and intensely likable. I’d be delighted to share a coffee, or perhaps another herbal beverage with Russ either in this life, or in a future incarnation!

Special Thanks to Harold Weinger (Universal Music Enterprises, NYU), who, in a separate event, also hosted the multi-talented Christian McBride (Chick Corea, Pat Metheny, Bruce Hornsby, James Brown, Sting, The Roots.) sharing insights into his dual careers as bandleader and as a sideman; being a musician, composer, interpreter, lifelong student and educator! 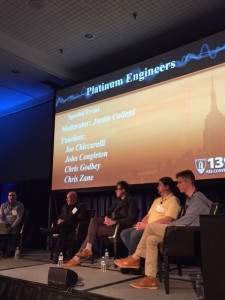 Highlights among the more technical panel discussions were:

Justin Coletti (Sonic Scoop) hosting Platinum Engineers Joe Chiccarelli (U2, Beck, Elton John Tori Amos, Morrissey and many others), the extremely talented John Congleton (more below), Chris Godbey (Timbaland, Jay-Z, Justin Timberlake, Rick Ross, Beyonce, Chris Cornell and others)  and Chris Zane (St Lucia, Passion Pit, The Walkmen, Friendly Fires) discussing their very own approaches to contemporary record making and showing off some really impressive sound bytes of their work. I took note when Joe Chiccarelli pointed out on several occasions that he felt he failed in his artistic vision if he hadn’t captured 90% of the desired sound by the time tracking was done!

A high-powered panel generously sharing some cutting edge info with the audience. Amazing! 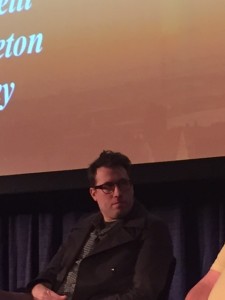 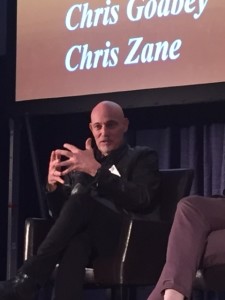 John Congleton was featured in a separate event hosted by Mike Tierney. John got into depth about his career, his methods and experiences working with the likes of St. Vincent, Swans, Modest Mouse, Franz Ferdinand, David Byrne, The New Pornographers et al. He shared excerpts of his work, demonstrating an iconic, cutting edge sound leaving no question why he’s sought after as an  indie rock producer.

I took note when John repeatedly emphasized creativity over gear, experimenting will all kinds of available gear including inexpensive guitar pedals and exploring any possible crazy combination including running his Boss pedals through his Fairchild!

John admitted that it took him a very long time ((6 or 7 years!) without anyone taking any notice of his artistic work! and stressed that unless there is true creative fire underneath, music may not be worth pursuing, at least not if one is in it to make a living. 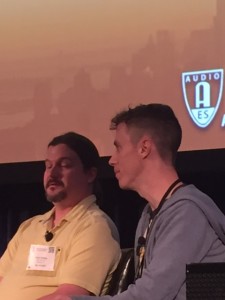 “Producing across the Generations: New Challenges, New Solutions-Making Records for Next to Nothing in the 21st Century”