Posted by plectrumnyc on Nov 6, 2015 in plectrum|nyc events | No Comments

Val generously shared a wealth of details about the production techniques for James Taylor’s “JT” album and Kim Carnes “Bette Davis Eyes” single, including the exact types of microphones used for drums and vocals and their placement. To note: he loves a pair of elam251s as drum overheads and u67 for vocal, tracked through an early API console.

He also shared samples of some of his current work with a new French Alternative Rock Band. 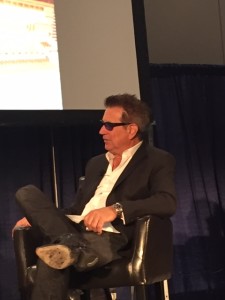 Glenn also hosted another fantastic panel with Dave O’Donnell, who engineered James Taylor’s “Before the World.”

Dave generously shared a wealth of resources, including images of preparing James Taylor’s barn for recording, images of the exact positioning of Steve Gadd’s drum setup and mics, the guitar and vocal mic positioning for James and Michael Landau, as well as the outboard gear, Pro-Tools settings and plugins used.

“Before the World” was recorded in many non-conventional settings.  They used hotel rooms for background vocal recording!

All details, including the beautiful sound over the PMC surround system, made this into a great learning experience.

Thanks Glenn and Dave! 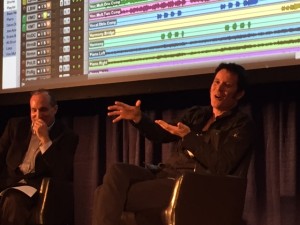 “Warren Huart – Recording James Blunt and the Fray” was hosted by Jonathan Pines (Rupert Neve Designs, Private Studios). Warren’s web show “Produce like a Pro” on YouTube is extremely popular and in this Master Class he shared more insights into the very cool techniques he used producing Alternative Rock.

His work has won him accolades from the likes of Aerosmith’s Joe Perry and the Fray’s Isaac Slade!!

By now it must have been obvious to everyone that Audio Engineers and Producers have great stories to tell.  What topped it all was: 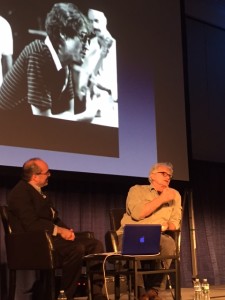 The audience in the room hung on Jack’s every word during the 90 minute talk!

Jack talked about his youthful adventures: making it to England without proper immigration papers, escaping from the ship that was supposed to return him to the U.S., making headlines in the British press for two weeks, and, at last, getting deported back to the US.  Many years later he met and befriended John Lennon (who apparently had a weakness for “Crazy Jack,” as Douglass was fondly called by the British press).

The personal stories revolving around John & Yoko, such as John explaining how to write a hit song: “Speak the truth and make it rhyme!” were first-rate.

Or Jack’s stories about John’s later day habits of recording while he was in bed: ”Surrounding John’s bed were guitars and tape machines to all sides. Recording him meant I literally had to jump in bed with him!”

The audience was spellbound and no doubt would have stayed until after midnight to listen to Jack tell his amazing tales!

There was one another event, which would have made the audience stay long into the night, no doubt:

The audience in the room gave Howard standing ovations after he presented excerpts detailing diligent and meticulous research into iconic Studios, including Abbey Road, Olympic, Trident, Decca, Pye, IBC, Advision, Apple and AIR, where many of the all-time greatest recordings of the 60’s and 70’s were made.

It was impossible for me not to grab a copy of “The Great British Recording Studios” afterwards. I strongly advise anyone passionate about music and recording history not to miss getting his/her copy as well. 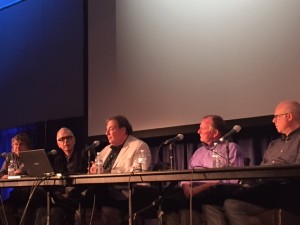 Thanks to the Audio Engineering Society for this 139th conference and the exceptional experience!