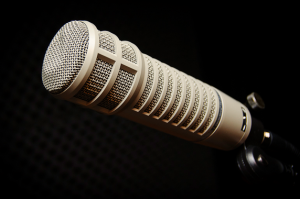 Electro-Voice RE20 at a Glance:

Cardioid Mic
A true cardioid microphone, the RE20 offers greatest rejection at 180 degree off-axis – directly to the rear of the microphone. Pattern control is so consistent that the frequency response is nearly independent of angular location of the sound source, creating virtually no off-axis coloration, yet providing greatest possible rejection of unwanted sounds. An integral blast and wind filter covers each acoustic opening on the RE20. In recording sessions or on stage, singers can “close talk” the microphone, singing with their lips almost touching the grille screen with no worry of “P-pops” or excessive sibilance. Part of the filter also shock mounts the internal microphone element, reducing the transfer of vibrations from external sources.

Large-diaphragm Dynamic
The exceptional performance of the RE20 is achieved by using a large Acoustalloy diaphragm in combination with an exceptionally low-mass aluminum voice coil. Using this diaphragm assembly, the RE20 is capable of reproducing extremely high sound pressure levels with no fear of the overload and distortion often experienced with phantom-powered condensers. The RE20 will also continue to function flawlessly in high humidity and elevated temperatures that would seriously degrade competitive condenser microphones. A massive steel housing and effective hum-bucking coil assure the RE20’s resistance to magnetically induced hum and noise. This means the RE20 can be used successfully in situations where other microphones would experience unacceptable levels of hum and buzz. By exploiting the strength of its steel housing and employing a mechanical nesting concept, EV designers have created an exceptionally rugged microphone with superior handling noise rejection ideally suited for professional uses.

Immune to Proximity Effect
The bass-boosting proximity effect common to most directional microphones when used close to the sound source, is eliminated in the RE20. This is accomplished via the application of the EV-exclusive Variable-D technology. By controlling the effect of microphone proximity, the RE20 can be located very close to sound sources without a loss in clarity or definition making the RE20 ideal for tight vocals and challenging instruments. It can be used inside bass drums, on acoustic guitars, and is found in voice booths and broadcasting studios everywhere.

Electro-Voice RE20 – A broadcast standard and a great studio mic, too!