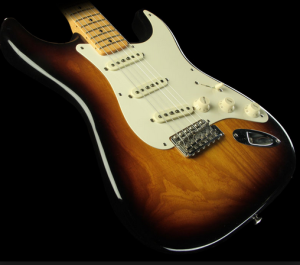 Overview:
Over the years, there have been many unforgettable Stratocasters: David Gilmour’s The Black Strat®, Stevie Ray Vaughn’s Number One, Dick Dale’s The Beast, Eric Clapton’s Blackie – but none of them would exist without the 1954 production model that started it all. This 60th Anniversary American Vintage 1954 Stratocaster® re-creates that inaugural Strat® in all of its glory in every possible detail, from its round string tree and bone nut down to its “patent pending” saddles. And when you plug in to your favorite tube amp, a set of three never-before-released 1954 Single-Coil Stratocaster pickups reward you by taking you on a journey back through six glorious decades of American electric guitar history.

A diamond jubilee celebration for Fender’s most popular guitar

After 60 years of continuous production, undergoing countless revisions, tweaks, and improvements, the Fender Stratocaster is still one of the most sought-after and constantly imitated solidbody electric guitars on the market. This limited-edition run of just 1,954 guitars celebrates the instrument once heralded as an “exciting new instrument” with a tone “as new and different as tomorrow.” Between its immaculate details and full set of vintage re-creation case candy, there’s no closer experience to owning the real thing than this!

Although introduced in March of 1954, the actual production model didn’t street until October of that year. In that time, the Stratocaster underwent many small changes, including the color and carve of the body. By May or June of ’54, Fender had arrived at the heavily contoured 2-piece ash body that went into production. The finish had also gone from a sort of brown edge burst to the canary yellow to amber brown 2-color sunburst found on Strats ever since. Other original details you’ll discover on the 60th Anniversary American Vintage 1954 Strat include a visible side seam and a flash-coat lacquer finish.

Over the past half a century and some change, one of the things that’s changed the most about the Fender Stratocaster is the neck. In 1954, the Stratocaster came exclusively with a 25.5″-scale 1-piece maple neck that featured a chunky carve that would later become Fender’s rounded D profile. On the fretboard side, rolled edges and smoothly finished fret ends offered the kind of comfort you’d expect from a modern binding. And true to the original production model, the 60th Anniversary American Vintage 1954 Stratocaster features a date stamp just below the truss rod adjustment nut at the base of the neck.

Bell-like, jangly, smooth, and bluesy – ask one any seasoned Strat player at Sweetwater and you’ll get a slightly different description of what this iconic guitar is supposed to sound like. Words alone can’t capture the sound, but the new 1954 Single-Coil Stratocaster pickups Fender designed for this guitar certainly can. In fact, the only place Fender went off-book was the 5-way blade pickup selector they installed to give you access to those in-between tones early Strat players discovered by accident. And if you really want authentic 3-way switching, Fender includes a 3-way switch that Sweetwater’s world-class guitar shop can easily install for you.

One of the things that made the original 1954 Stratocaster a truly revolutionary instrument was the introduction of the Fender Tremolo Action bridge. Initially offered as an option, this uniques string-bending system soon became the de-facto standard. Beneath its vintage “ashtray” bridge cover, the 60th Anniversary American Vintage 1954 Stratocaster sports six re-creation ’54 saddles complete with “patent pending” stamps. Adjustable from the start and as sable as ever, you can’t pick up one of these amazing guitars without experiencing the wonder the first Strat players must have felt.

It wouldn’t be a genuine 1954 Strat re-creation if the 60th Anniversary American Vintage 1954 Stratocaster didn’t come loaded with all the right appointments. Nonetheless, it’s nothing short of inspiring what lengths Fender went to to ensure you’d get the most authentic experience possible. From the white, single-ply pickguard made of .06″ ABS to the white polystyrene (advertised as Bakelite) control knobs Fender settled on in September of 1954, all of the plastics are as true to the original as it gets. Other details you’re sure to love include an original round string tree, vintage tuners that perfectly imitate the original unmarked “No Line” Kluson Deluxe tuners, and nickel-chrome hardware.

When you bought a Stratocaster in 1954, you didn’t just get the most amazing electric guitar on the market, you also got a case full of premium accessories and a full set of documentation. Fender made it a point to re-create this package as perfectly as they could. It starts off with a replica single-stitch center-pocked tweed case. Inside, you’ll find replicas of the original polishing cloth, cable, and bridge cover that came with the ’54 Strat, plus a pair of extra tremolo springs. On top of that, Fender reproduced the original 1954 paperwork and literature, collectable items any lifelong Fender player will appreciate.

Special Extras and Accessories Include: