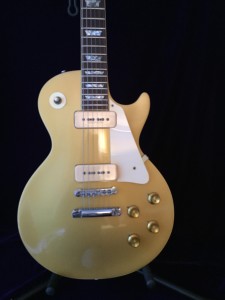 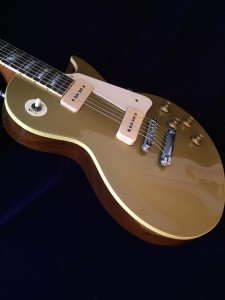 1968 Gibson Les Paul Standard goldtop guitar Re-introduction specs:1st reissue of the 1956 style Les Paul Standard started in August 1968, with a single cutaway mahogany body (one piece) with a center seamed maple top, goldtop finish, tuneamatic bridge, small (narrow width 1950’s style) peghead, P-90 pickups. Neck is a single piece of mahogany with two small “wings” glued to the side of the peghead (50s style contruction). Tuners are nickle plated double-lined, double-ring style Klusons with plastic buttons that say “Gibson Deluxe” vertically. The binding in the cutaway gets wider than it’s 1950’s counterpart, completely covering the maple top (unlike the 1950s binding which shows a slice of the maple top in the cutaway below the binding). Also the serial number is stamped into the wood at the back of the peghead, all metal parts (except tuners) are chrome (not nickel), and the gold knobs have metal inserts in the tops with “volume” and “tone” printed on them. The neck also has a 14 degree peghead pitch instead of 17 degrees, and Indian rosewood fingerboard instead of Brazilian. The fingerboard inlays have a different look too, because it’s a different block of celluloid than the 1950s guitars.

Other than that, 1968 goldtops look and are constructed just like 1956 LP goldtops (except the weight of these guitars tends to be much heavier than the 1956 models). Most 1968 Les Pauls use Sprague “black beauty” tone capacitors, but also some use the SG-era brown disc capacitors. The control cavity route in 1968 is different too, as it was routed all the way thru the mahogany body *before* the maple top was glued on. There is no “bite” mark in the cavity as seen in the 1950s Les Pauls. That is, the walls of the control cavity are straight, and the floor is flat (1950s models have a contoured cavity floor). The wiring route is a square route (not a drilled hole). Note the rumor that 1968 Les Pauls used leftover 1950s bodies is completely untrue.