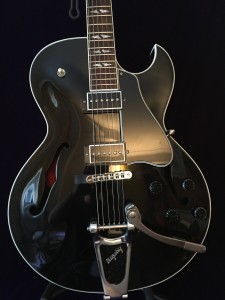 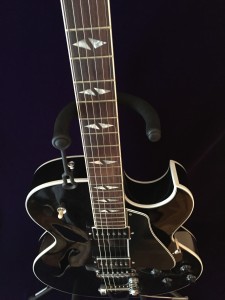 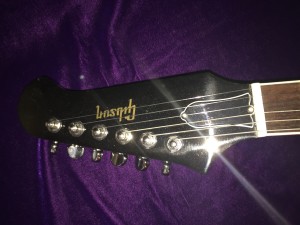 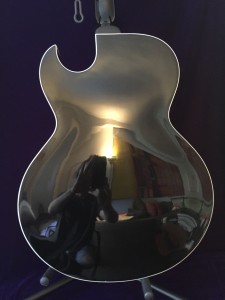 ES-195Raw and refined in equal measure, the new ES-195 from Gibson Memphis is a rock and roll machine pure and simple, but can turn its ferocity to a surprisingly broad range of styles within that realm—and plenty more outside it, too. Combining the rich pedigree of Gibson’s tradition in archtop-electrics with the snarl and attitude of the company’s seminal solidbody rockers, the ES-195 makes a striking statement with both its beguiling looks and monster tone.

What’s more, the ES-195 can turn its hand to jazz without breaking a sweat, thanks to a body proportioned and constructed in homage to the legendary ES-175 but ¾” thinner and a pair of humbucker-sized P-94 single-coil pickups. But one look at that Firebird-inspired Trini Lopez neck and headstock tells you there’s far more under the hood: add some serious attitude when you hit the strings, then prepare yourself for pure rock fury.

A Bigsby™ vibrato tailpiece takes it all to another dimension, letting the ES-195 run from classic rockabilly growl, to meaty country twang, to atmospheric alternative excursions. On top of all this, the ES-195 looks superb in your choice of Ebony with chrome hardware, or Trans Amber Stain atop a Grade-AAA figured maple top with gold hardware–both complemented by distinctive split-diamond mother-of-pearl fingerboard inlays. With the ES-195, a new adventure in guitars awaits you at your authorized Gibson Memphis dealer.

Body and NeckThe ES-195 has a fully hollow body constructed in the ES-175 style, with laminated maple top, back, and sides, arched top and back with traditional f-holes and white top binding. It has a glued-in maple neck with bound rosewood fingerboard inlaid with mother-of-pearl split-diamond position markers. The headstock is patterned after the Trini Lopez model of the 1960s, itself inspired by Gibson’s non-reverse Firebird.

Pickups and ElectronicsTo take you from roaring rock and roll to warm, purring jazz and spankin,’ twangin’ country, the ES-195 is equipped with a pair of Gibson’s popular P-94 pickups modified to give hum canceling performance when played together. Made with genuine Alnico II magnets, these pickups are constructed in the image of the beloved P-90 single coil, and offer the same blend of bite and snarl, but are sized to fit traditional humbucker mounting rings. The standard four-knob control section of two independent volume and tone controls and a three-way Switchcraft™ toggle switch complete the electronics.

Hardware and PlasticsThe ES-195 carries Gibson’s legendary Tone Pros™ bridge with roller saddles on an ebony base, partnered with an authentic Bigsby™ tailpiece for smooth vibrato action. High-quality Grover™ Mini tuners grace the six-in-line headstock, and all hardware is gold-plated on the Trans Amber guitars, and chrome on the Ebony guitars. The Trans Amber ES-195 carries amber Top-Hat knobs, while the Ebony wears black Top-Hats, and both versions have a black five-ply pickguard and black truss-rod cover.