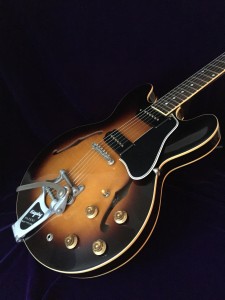 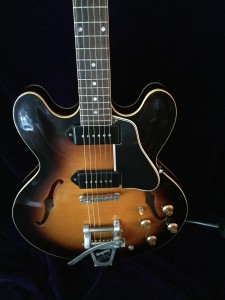 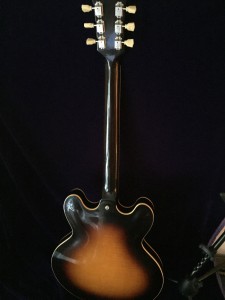 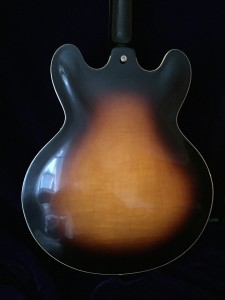 In our opinion this must be one of the coolest ES 335s ever, plus we love Luther Dickinson, the Mississippi Allstars and Luther’s playing with the Black Crowes.
Quick Overview
Luther Dickinson ES-335
Steeped in the authentic blues of North Mississippi Hill Country originals like R.L. Burnside, Junior Kimbrough and Otha Turner, Luther Dickinson and his North Mississippi Allstars made a major impact on the music world when they hit the scene in the late 1990s. His searing tone and dynamic playing style have become instantly recognizable, and Dickinson has lent his formidable chops to class acts like Beck, the Replacements and Mojo Nixon.The Luther Dickinson ES-335 packs Dickinson’s own heady blend of innovation and tradition into a fresh—yet timeless—guitar whose surprising versatility fits multiple genres of music like a glove.The Luther Dickinson ES-335 is built in the image of the renowned late-’50s ES-335, with a semi-hollow body for depth and resonance and a solid maple center block to aid sustain and combat feedback. Rather than the ES-335’s humbucking pickups, however, it carries a pair of Dickinson’s beloved P-90 single-coil pickups with “dog-ear” covers, for a distinctively biting, punchy tone. “I fell in love with the ES-330,” says Dickinson, “so what I wanted to do was combine the two. If we can get the P-90 sound and response of a 330 on a 335 semi-hollow that can handle the rock and roll environment—now we’re really getting somewhere. And then the cherry on the top… we put the Bigsby on there.”To top it all off, Luther wanted the guitar’s finish to match the finish on a vintage ES-175 owned by his father, Memphis musician and producer Jim Dickinson, so Gibson Memphis pulled out all the stops. The deep, rich, vintage-toned “Jim Dickinson Burst” drips with tradition, and looks and feels gently aged right out of the case, thanks to Gibson’s proprietary VOS process.
Body and Neck

Built in the image of the original 335s of the late 1950s, the Luther Dickinson ES-335 features a top, back and sides made from laminated maple with a solid maple center block, and traditional f-holes. The glued-in neck is made from solid quarter-sawn mahogany, topped with a hand-selected dark rosewood fingerboard with late-’50s pearloid dot position markers. The body’s top and back and the fingerboard are all trimmed in vintage cream binding. The guitar’s nylon nut is cut on the PLEK automated trimming system for unparalleled precision.

A A pair of Gibson’s legendary P-90 pickups with “dog-ear” covers graces the Luther Dickinson ES-335. Since their arrival in the mid ’40s, these pickups have won fans for their thick, slightly gritty midrange and distinctive bite. These P-90s are extremely accurate recreations of the originals, made with dual Alnico II magnets and Custom wound with 42 AWG wire and left unpotted for added character and are hum canceling when in the middle position. They are routed through the traditional complement of two independent volume and two independent tone controls, with a three-way Switchcraft™ toggle for pickup selection.

The Luther Dickinson ES-335 carries an ABR bridge and Bigsby™ vibrato tailpiece, with high-quality Kluson™ tuners featuring single-ring tulip buttons, all gently aged in Gibson’s VOS process. The controls have amber Top-Hat knobs with no inserts, and the guitar has a traditional bell truss-rod cover and five-ply b/w/b/w/b pickguard.

Each guitar comes protected in a hardshell case and includes a Gibson Memphis Certificate of Authenticity and Gibson’s Limited Lifetime Warranty and 24/7/365 customer service.